skip to main | skip to sidebar

So tonight, I randomly grabbed off our wine rack a 2005 Colosi red wine from Sicily. I bought it a while back from LA Wine Co for $7. 100% Nero d'Avola grapes. Pretty darned good juice, especially for the price. A little musty on the nose - not sure if that's the right term, but it's all I could think of. Medium bodied, straight forward, cherry, red fruit, nice acidity, solid tannin, balanced. The musty scent on the nose also makes a brief appearance on the finish. Definitely a solid food wine. Great value.
Posted by Kirkland Moody at 9:46 PM 1 comment:

So, we drink a little port almost every night and it's my favorite thing in the whole wide world, but for some reason I've never blogged about it. So it deserves a special 3 part in-depth series! And there is good reason why, but first a little information...
Here's the basics: true port is fortified wine (grape spirit is added to wine during fermentation) from the Duoro Valley of Portugal. They have very specific categories of port. A governing body in Portugal decides which years are good enough to create quality wines, which are called a declared vintage. Recent declared vintages are 2007, 2003, 2000, 1997, 1994, 1992, 1991, 1985 etc. Vintage ports are considered to be the best quality and get the highest prices. They are not meant to be drunk when released but many years later. One practice is to give a gift of vintage port to a child when born so when they turn 21, they can drink an awesome wine. A Late Bottle Vintage port (or L.B.V.) is port from the same year as vintage port but is meant to be drunk upon release. To be a LBV, the port is aged for 4-6 years in the cask (unlike vintage port which spends a maximum of 2 1/2 years in cask) which basically speeds up the maturation process.
Still reading? OK, so I bought three different 2003 LBV's. The first is a 2003 Taylor Fladgate L.B.V. $22 at the Wine House. Taylor Fladgate is one of the older and more well respected port houses. Some LBV's need to filtered (if it has a real cork, you have to filter it) and some don't (it has a stopper you can pull out with your hand.) This is a pull-out cork, so no filtering.
It's very yummy stuff. Lots of dark cherry and dark fruit flavors. A bit fruitier, more floral and sweeter than I expected. Not bad, just surprising. Great structure. Although I'm partial to aged tawny ports (that is a whole different lesson), I really am liking the 2003 LBV's so far. Part 2 coming next week.
Posted by Kirkland Moody at 10:20 PM No comments:

So, this evening we are trying a 2006 Havens Hudson Vineyard Syrah, for the first, and probably, last time. Not because it's bad, but because Havens no longer exists. They went out of business and sold off all their stock this past summer. As a result, many places, like the Wine House, bought up a ton of the inventory and are selling it at ridiculous prices. I think this was originally about $45, but Wine House was selling it for $18.
Well, it certainly is pretty good juice. Big and a bit sharp at first, we had to decant it to let it open up and soften a bit. Once it settled, it was darn good. Great syrah-y flavors, fairly complex, big red fruit, lots of pepper - reminds me of smoky BBQ. However, just a bit sharp in the finish, even a few hours after decanting. Not a totally bad thing, just evident. If you have the chance, grab some and check it out before it is all gone.
Posted by Kirkland Moody at 7:44 PM No comments:

This evening I grilled a marinated skirt steak and wanted a big wine that would hold up to it. So I selected a 2005 Shining Hill Columbia Valley Red Wine. $30 at LA Wine Co.
This is basically the 2nd label of Col Solare, the joint venture between Chateau St. Michelle of Washington and Marchesi Antinori of Tuscany. Col Solare is a wonderful wine, but priced a bit high for us (about $50), so we've only had it once. It is made the same as Col Solare, but basically using the 2nd tier grapes. As I understand it, they intend to release this vintage a year before the Col Solare is released. This first vintage, however, was released at the same time as the 2005.
Very bold wine. Made of 58% Merlot, 23% Cabernet Sauvignon, 16% Syrah, 3% Petit Verdot. Big stuff, kind of crushed my palate at first, but great balance. Big medium to dark fruit, a little bit of spice and cedar notes on the nose and at the end. Long finish, nice complexity.
Really good stuff - some decanting may have helped to soften it a bit. Have to have it again!
Posted by Kirkland Moody at 9:01 PM No comments:

Toooooonight! A 2007 Robert Sinskey Pinot Noir Los Carneros. $34 at the Wine House. Crazy guess, but I bet the fruit comes from Carneros, the cool area of southern Napa great for growing Pinot Noir. Can't recall where we discovered Robert Sinskey Pinot Noir, but we have had it before and felt we needed to try it again.
To me, a wonderful balance of the flavors of "New World" Pinot Noir with the restraint of "Old World" Pinot Noir. Will not be confused with some of the bolder Oregon pinots. If you like big, bold, knock out wines, this is not for you. A nice balance of bright cherry and raspberry, spice and earthy flavors, none of them overdone. Silky mouth feel. Just a pleasure to drink. Not uber complex, but a lovely wine.
Posted by Kirkland Moody at 9:15 PM No comments:

This evening, a 2006 Bodegas Salinas Mo Monastrell. $11 at LA Wine Company. A big wine which, at first, I thought was simple, but actually has some nice complexity. A mix of flavors: cherry, black pepper, licorice, blueberry and significant tannin. According to a little research, this wine is mostly Monastrell (which accounts for the tannin) as well as some Tintorera Garnacha (also known as Alicante) and some Cabernet Sauvignon. A solid wine, and probably a good example of this style from Spain for a good price, but not my favorite flavor profile.
Posted by Kirkland Moody at 8:24 PM No comments: 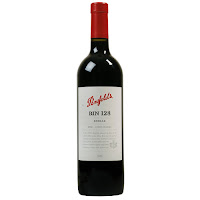 This evening we consumed a 2006 Penfolds Bin 128 Coonawarra Shiraz. Penfolds makes a wide array of wines, with prices ranging from $8 to $300. Overall, they consistently make pretty dang good wine and are always rated well.
Way back in our early days of wine drinking, we discovered Bin 389, which at the time was $20 - now it's closer to $30. So, we've tried others, including this for about $18 at the Wine House.
100% Shiraz from lovely cool weather Coonawarra, Australia. Very solid wine. Not much to complain about. Lots of ripe medium and dark fruit berry flavors, a decent amount of oak, nice structure. Decanting may help soften it a bit. Simply good Shiraz!
Posted by Kirkland Moody at 10:20 PM No comments:

Links that have nothing to do with wine

Kirkland Moody
I'm 39. Married. No kids. 1 dog. 1 cat. Unknown quantity of fish. The fish are all named Phred. It makes it easier to cope when one dies.